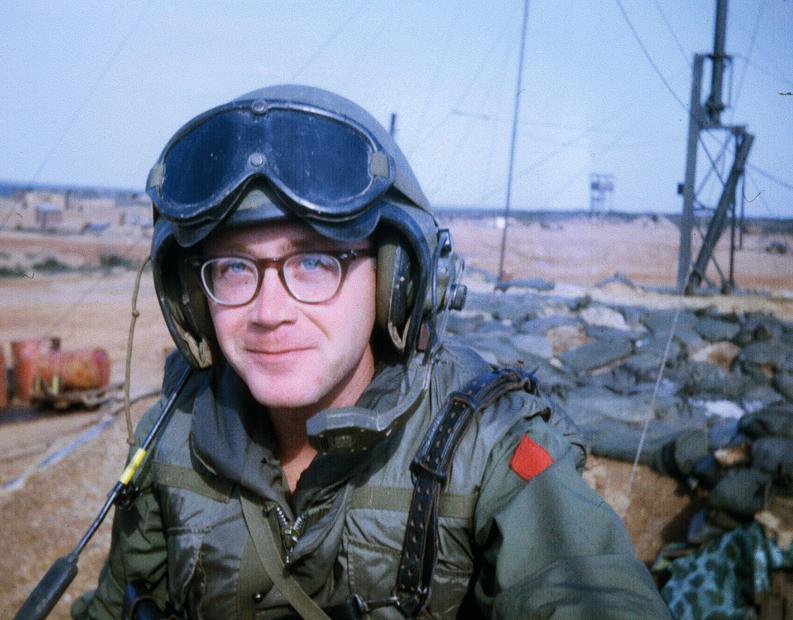 After completing medical school in 1968, James B. Evans, a Texas native and TCU alum, was drafted into the Army as a physician for the Vietnam War. Up to that point, the drafting process felt like the “footsteps of fate.”[i] Yet, when Evans received his draft order in January 1969, he felt as if the wind had been knocked out of him; “you know you get these orders and it’s stunning because you realize you’re going to get sent to a very bad place.”[ii] In the blink of an eye, this “bad place” became Evans’s reality.

In October 1969, Evans boarded a plane heading 8,000 miles away from the comfort of home. Although Evans’s future was uncertain and he questioned the war effort, he planned to serve respectably and proficiently. When Evans arrived in Quang Tri, Vietnam, he was met with the sound of American soldiers cheering in excitement. Enthusiasm turned to horror as Evans realized the men were chanting, “Fresh meat! Fresh meat!”[iii] This ghastly welcome marked the first of many grim dealings Evans would face during his service in Vietnam.

Dr. James B. Evans returns to Fort Worth, Texas after a year in Vietnam.

When Evans arrived in Vietnam, he was far from prepared for the obliteration of human bodies with which he was confronted.[iv] Assessing casualties and determining which lives could be salvaged became Evans’s new normal; “it was the horror of war,” he recalled. “It was very real.”[v] Despite Evans’s lifesaving efforts, he felt uneasy about the futile care provided to Vietnamese civilians. Unable to address their basic sanitization and immunization needs, Evans felt his labors in vein: “What we were doing was ridiculous… it was a political activity… it was medically ineffective.” [vi] Evans soon came to the realization that his job was not to solve the medical issues of Vietnamese civilians, rather, it was to win their hearts and minds.[vii]

The U.S. strategy of “winning the hearts and minds” of Vietnamese civilians though medical civic action programs may appear paradoxical, for Evans said, “the aim of war is to kill, while medicine, and the professionals who practice it, strive to heal.”[viii] Although American aid provided thousands of Vietnamese civilians with temporary relief, this paradox left Evans feeling uneasy about the insufficient care physicians provided in Vietnam.[ix] Although Evans returned from Vietnam with feelings of uncertainty, he continued to practice medicine and render aid to retired service men in Albuquerque, New Mexico.[x]

Parrish gives a detailed look at his service as a U.S. Navy physician in Vietnam. He contemplates the reason he went to war and questions the training he received, which left him less than prepared for the cruel realism of war. Despite this lack of preparation, Parrish works endlessly to save the lives of his patients while under the horrific circumstances of war.

Trueblood recounts his experience as a young surgeon being drafted into the US Navy and sent to battle in Vietnam. He discusses the undeniable hardships and unimaginable difficulties of performing procedures under gunfire as well as the love of a woman back home, which helped him survive.