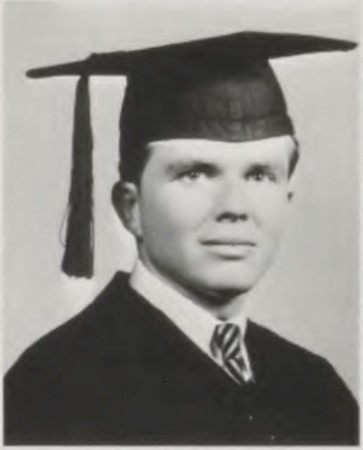 Photograph of James Lane as a senior at T.C.U.

From 1962 to 1966, James Warren Lane attended Texas Christian University, where he was a member of the Delta Tau Delta fraternity and presided over the Inter-fraternity Council in his senior year. After his time at T.C.U. James Lane went to Baylor University to receive his Bachelor of Laws and his Doctor of Jurisprudence. James Lane joined the United States Army in April 1969, then the Judge Advocates General’s Corps, also known as the JAG Corps.[i] In 1970, Captain James Warren Lane became a defense attorney for three men accused of murder in connection to the killing of as many as 500 Vietnamese civilians at My Lai, on March 16, 1968.[ii]

The events at My Lai polarized the nation, and the fallout of the killing, as well as the subsequent trial, became the most well-known event of the war. Many American citizens were not prepared to face the idea that their soldiers had murdered innocent civilians overseas, and those who vilified the atrocity were under the impression that the trial was only meant to save higher ranking officials from facing punishment.[iii] In total 26 men faced Court Martials for an assortment of crimes, including murder, rape, and arson, but only one man was convicted, Lieutenant William Calley Jr. According to witness reports, as well as Lieutenant Calley, a misunderstanding of an order issued by Captain Ernest Medina led to the ruthless killing of innocent villagers.[iv]

James Lane defended three men in total during the Court Martials. The earliest mention of James Lane in the My Lai trial is the 5th of March, 1970. In a piece of correspondence found in the Texas Tech Vietnam Archives, Captain Neil Buren informed James Lane of the charges aimed at one of his clients, Sergeant Hutto.[v]  The documentation for James Lane and his involvement with the trial largely concerns Sergeant Hutto. The other man to face trial was Captain Eugene M. Kotouc. There was a third man, Corporal Kenneth Schiel who was also tried, however the charges against him were dropped before a trial began. From several letters of correspondence about Corporal Kenneth Schiel, it is shown that James Lane wrote to civilian attorneys and even state representatives as a means to help Schiel’s case.[vi] These letters often detailed the raising of funds for a civilian attorney for Corporal Schiel. James Lane was successful in ensuring that charges against his clients were dropped, or that they were to be found innocent in their trials.

James Lane has made several statements over the years about these trials, including one concerning Sergeant Hutto’s defense. In an interview with a local news organization, James Lane states how he and a second attorney convinced a jury that Hutto was incapable of forming the intent of murder, due to being such an “automaton” therefore he could not be convicted.[vii]

Throughout his career, James Lane has stated that his defense of the soldiers tried for murder was based upon his belief that they only did what was asked of them, but in recent years he has made statements detailing his understanding of the grief faced by the Vietnamese people, and quotes his Native American roots as his foundation for this belief. He has visited Vietnam and even left a personal belonging at the My Lai memorial site, though he has not revealed what said item is.[viii]

[iii] Michal R. Belknap, The Vietnam War on Trial: The My Lai Massacre and the Court-Martial of Lieutenant Calley. (Lawrence: University Press of Kansas, 2002) 3.

William T. Allison, Military Justice in Vietnam: The Rule of Law in an American War. Lawrence: University Press of Kansas, 2006.

William Allison details the world of military law in Vietnam; and the average job of JAG lawyers during this time. This book details the foundation for modern military law and how it influenced legality during the war in Iraq.

Bernd Greiner details his belief that the blame of the My Lai Massacre should have been laid upon the shoulders of high ranking military officials, as well as the government. Reiner details how the exploitation of young men led to the degraded morals that resulted in brutality.

← James B. Evans
About the Authors →
The Vietnam War at TCU
Jim Lane - Attorney at War