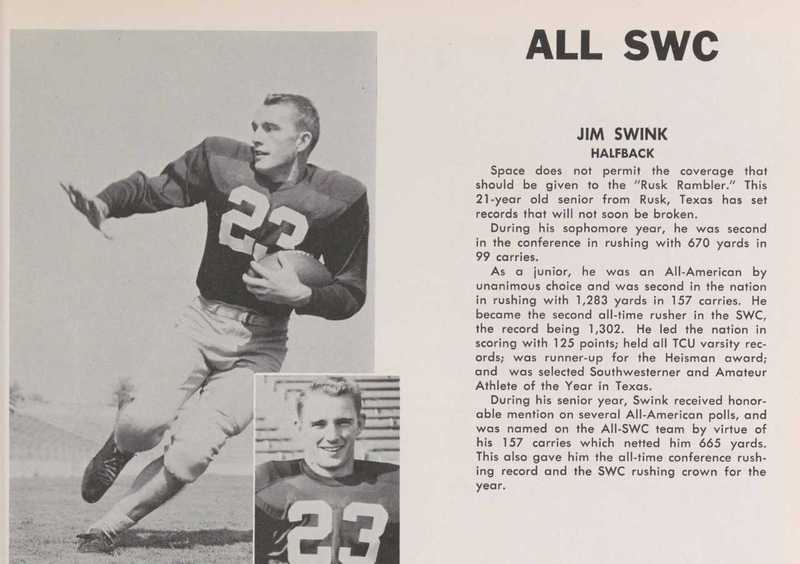 Swink featured in the Horned Frog yearbook in 1957, displaying his prolific statistics and accomplishments during his time playing college football at TCU.

Two-time All-American, two-time Academic All-American, Runner-Up for the Heisman Trophy, winner of the Doak Walker Legends Award, member of the College Football Hall of Fame, two-time TCU Football Captain, recipient of the Purple Heart and Bronze Star Awards.[i] These are only some of the honors James “Jim” Swink has accumulated in his lifetime. The question is, who was the man behind these incredible achievements?

Nicknamed the “Rusk Rambler,” Swink grew up in the small town of Rusk, Texas.[ii] A strong work ethic and humility set the precedent for Swink’s life at a young age.[iii] Following athletic success in high school, Swink accepted a scholarship to compete in both basketball and football at TCU, where he quickly established himself on campus as one of the friendliest and most popular freshmen by his fellow classmates.[iv]  Even with this distinction, his classmates believed Swink remained a humble individual.[v] Athletically, Swink burst into the spotlight his junior season, and was described as dangerous by opposing football teams.[vi] Swink graduated from TCU in 1957 as a pre-medical student and was drafted by the Chicago Bears in the second round.[vii] Rather than pursuing a career in the NFL, Swink chose to attend medical school.[viii]

After practicing medicine for three years (1962-1965), Swink’s life drastically changed: the Army drafted Swink as a doctor to serve in the Vietnam War, where various experiences revealed his true character as a natural leader and hard-working individual.[ix] Commissioned as a Captain, Swink departed for Vietnam in August of 1966 and was assigned to a surgical hospital in the city of Chu Chi.[x] His efforts focused on the U.S. combat troops: caring for war wounds, performing amputations, and providing prompt care to soldiers dropped off by helicopters.[xi] 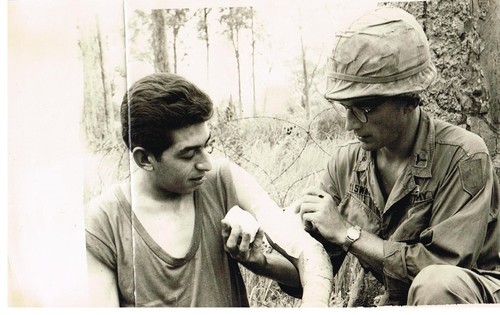 Captain Swink providing medical care, illustrating the support and care he offered as a medical officer in the Army.

Swink was then transferred to the 1st Division, where he managed medical units of over thirty men.[xii] In general, U.S. medical personnel held dual roles while completing their service in Vietnam. Primarily, they offered care to American soldiers, but also cared for Vietnamese civilians as a means to win their hearts and minds.[xiii] Swink additionally held a supportive role within the unit; his presence was regarded as a blessing and comfort by the men he accompanied in battalion-sized operations. Swink fought hard and was simply someone the men could go to for support.[xiv] Swink possessed a strong toughness, too; once wounded by mortar fragments in combat, he proceeded to both treat and bandage himself up.[xv] A patriot at heart, Swink viewed his service as an honor to his country, saying, “I’m no better than the next guy, I gave the army two good years, did the best job I could do.”[xvi]

After completing his service in Vietnam, Swink continued his career in orthopedic surgery for over thirty-five years.[xvii] Sadly, on December 3rd, 2014, Swink passed away in his home at the age of seventy-eight.[xviii] A loyal man to the purple and white and the stars and stripes to the end, Swink was both humble and unassuming throughout all of his endeavors.

Caldwell chronicles his personal account as a Navy Doctor providing care to both soldiers and Vietnamese civilians. His account and captivating photographs provide a different view than the jungle patrols and deadly firefights most often told.

Trueblood discusses his gruesome experiences as a surgeon in the Navy during the Vietnam War. According to Trueblood, he performed operations during heavy conflict and witnessed young men die on the operating table.