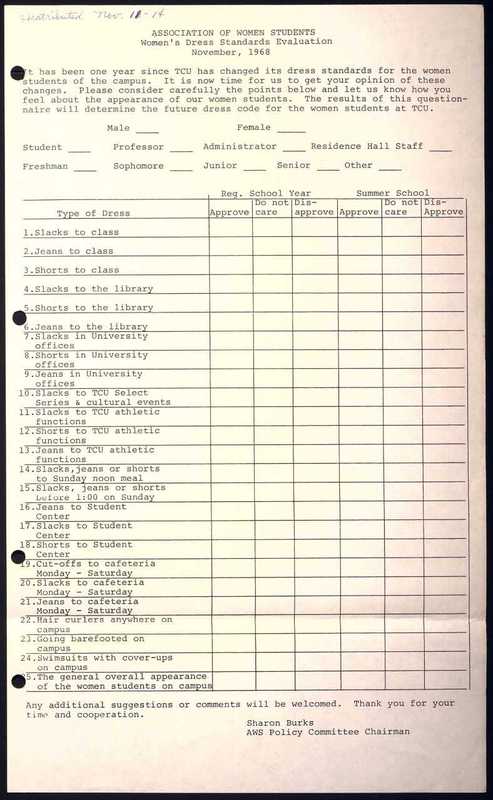 The Dress Code Questionnaire sent out to TCU students, faculty, staff, and administration. 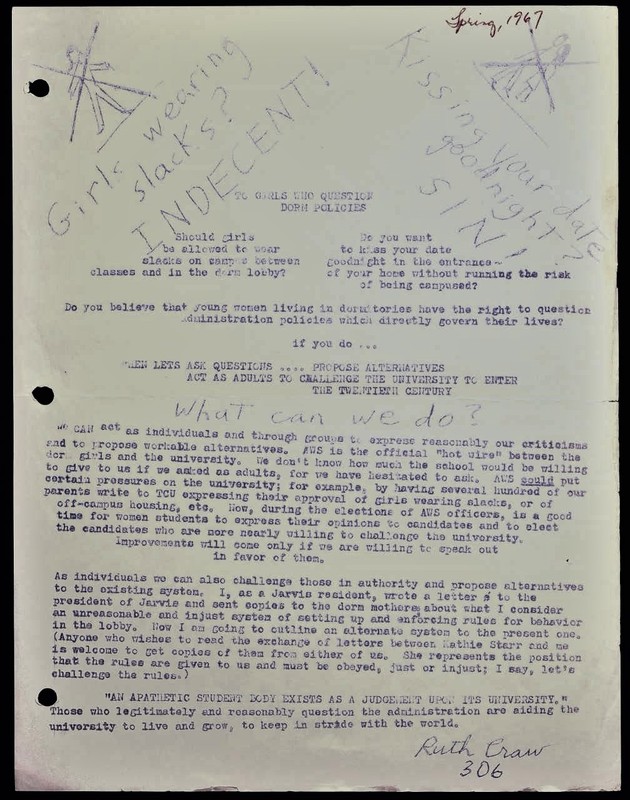 Doodles and notes written on a document addressed to girls who questioned the dress code and curfew policies on TCU.

The Vietnam War era brought about drastic cultural changes across the United States, especially among young adults on college campuses. While the country was seeing an emergence of hippies, sex, and drugs, Texas Christian University largely stuck to its Christian, conservative, and strict core values, as illustrated with the establishment of the Association of Women Students (AWS). Comprised entirely of women, this organization discussed matters affecting women on campus and coordinated programs, created scholarship and leadership opportunities, and “maintain[ed] high cultural, educational, and social standards for university women.”[i] The AWS primarily focused on the latter purpose concerning social standards for TCU women.

During the few years in which this organization was active (1964-1970), the members’ primary concern was creating a strict dress code and curfew to which only female TCU students had to adhere. AWS members believed that women were no longer dressing appropriately, not just in American society, but also on TCU’s campus. In an effort to change women’s appearance on campus, which they believed needed to be improved, the AWS sent out a dress code questionnaire to all students, administration, faculty, and staff. It asked their opinion of women wearing slacks, jeans, shorts, cut-offs, and hair curlers, and going barefoot in various places around campus such as the cafeteria, library, class, and at athletic functions. It even asked what time of day would be appropriate for such attire. The AWS claimed at the top of the document that the results of this questionnaire would help determine next year’s dress code for female students.[ii]

The second biggest issue the AWS tackled was the establishment of a curfew for female students. This was a controversial topic on campus, and the strict rules of the curfew resulted in many women receiving demerits for breaking curfew. Several files in TCU’s Special Collections list all the girls who had broken curfew, their excuse, and whether that excuse was legitimate. One girl even got a demerit for attending a funeral because she “did not call the dorm although she knew she would be late.”[iii] The AWS enacted the curfew because they believed it was scandalous for women to be out by themselves or with a male past a certain time and that it would harm their reputation.[iv]

The AWS went against most of the cultural norms that had been established on most college campuses during the Vietnam War. Other colleges across the country had waves of female students that experimented with their sexuality.[v] The AWS, however, fought to keep female purity and the clean image of the girl next door, a figure that was prominent to keeping women in their conformed gender roles.[vi] The AWS at TCU was falling behind the times in the era, clinging to the past in hopes of maintaining young women’s purity and femininity.

This book gives a look at another organized female organization during the Vietnam War era with a completely different goal in mind. Swerdlow writes about Women Strike for Peace’s triumphs, problems, and legacy for the women's movement and American society.

Susan J. Douglas, Where the Girls Are: Growing Up Female with the Mass Media, (New York: Times Books, 1994).

This book covers the messages that were sent to American women through the 1950s and the 1960s in popular music, advertising, news, and television programs and how those messages influenced the lives of these women.