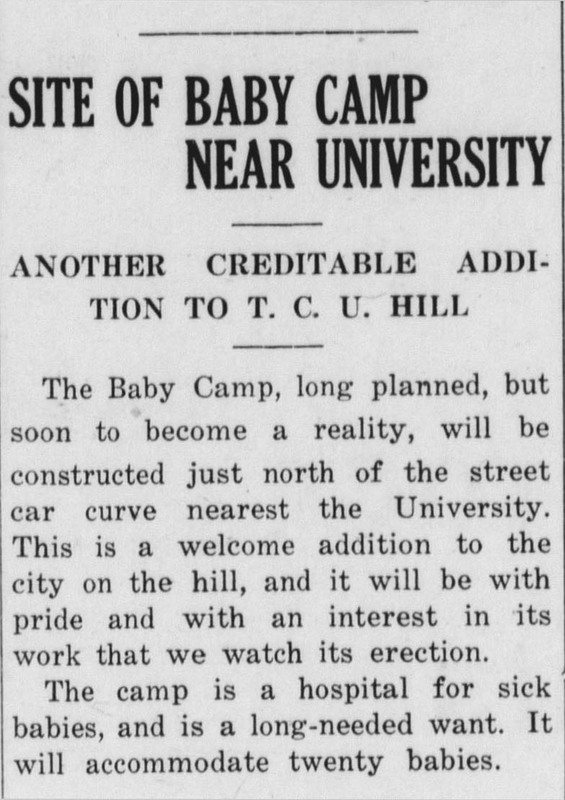 During World War I, women were an unstoppable force on the home front, proving their involvement was vital to success. This force was clear as ever in Fort Worth, Texas, where women collaborated to provide a place for sick and uncared for children. They created a Baby Camp near Texas Christian University, which originally functioned as a free hospital that eventually developed into one of the biggest children’s hospitals in the area.

Two narratives about the Baby Camp’s origination both involve a young Ida M. Turner and her desire to help her community. Having graduated from the Cooper Art Institute in New York, Turner taught art at Texas Wesleyan College when she changed life paths to commit herself to the Fort Worth Free Baby Hospital.  She was inspired by a baby left without a family in November 1917 to establish a hospital for children just prior to the U.S. entry into World War I.[1]

The Fort Worth Free Baby Hospital officially opened on March 21, 1918, between Park Hill and TCU.[2] It accepted all children regardless of race, religion, or nationality; and no child was denied care due to lack of funds.[3] From the day the first child arrived to the hospital,  children have been constantly been cared for in the Fort Worth community. 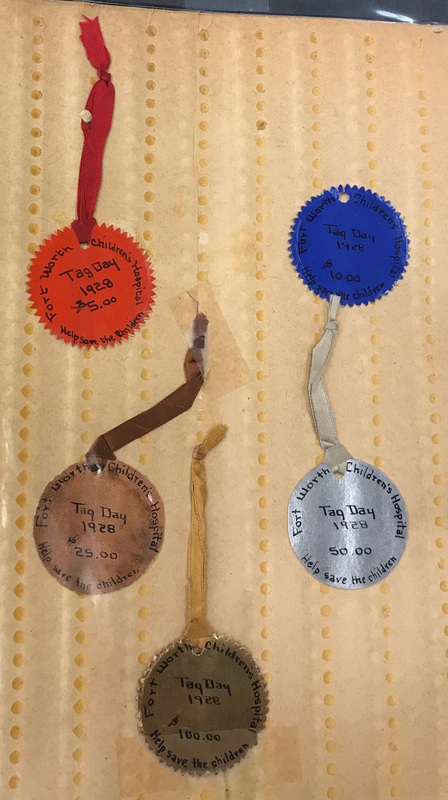 Examples of Tag Day sales to raise money for the hospital

The success of this so-called “Baby Camp” would not have been possible without the Fort Worth Federation of Women’s Clubs. This group served as the primary fundraisers and organizers of the hospital's development and owned the land on which the hospital was built.[4] Elite women across the country engaged in similar programs to help the children impacted by war. For example, the Woman’s Committee of the Council of National Defense established a Children’s Year program in 1918 that sponsored child welfare and infant mortality measures to ensure the development of the population despite war-related deaths.[5] The TCU and Fort Worth community internalized this focus in their work at the Baby Camp, caring for future generations of citizens.

The creation of the Fort Worth Free Baby Hospital was a community effort, whose success hinged on the generosity of the people. After its original conception, Turner turned to hundreds of local individuals and companies to donate everything from stone to brick and lumber, beds and showers.[6] Monetary donations occurred most frequently through cash subscriptions and Tag Day sales, both of which helped the Baby Camp be debt free and self-sustaining after its first year.[7] TCU students helped foster this community by participating in many fundraising events and volunteering at the hospital.[8]

From its humble beginnings with just thirty beds, the Fort Worth Free Baby Hospital continuously developed to meet the demands of growing populations. Throughout the years, it added beds, floors, and relocated until it found its final home in 1985 as Cook Children’s Hospital, where it still stands today.

This book explores how women were mobilized into military roles such as nurses and physicians and how this mobilization  expedited their fight for suffrage.

This book provides a broad background of women’s involvement in social welfare. Specifically, it discusses the development of a maternalist welfare state in which children are a central focus.