Campus Efforts During World War I 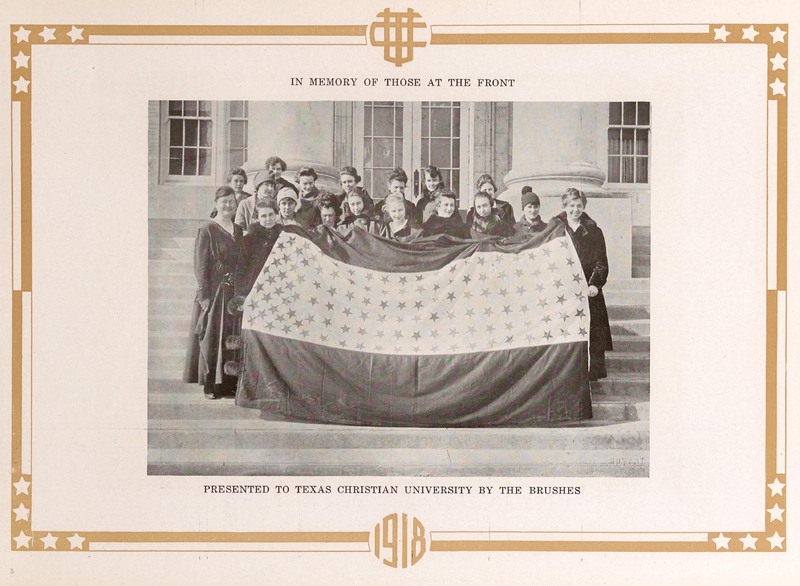 Whether it was knitting socks and other clothing items to be sent to the troops on the western front, conserving food so there would be more for the doughboys, or encouraging young men to join the fight, the TCU student body, faculty, and administration contributed significantly to World War I.[i]

The excitement of the war drew a lot of men to join the military, and many students wanted to leave school and join the fight.  Two weeks after the United States entered the war, the TCU faculty unanimously voted to graduate six male senior candidates early, so that they could join the Army’s officer training corps.  These six seniors graduated on May 5, and they immediately left for a three-month officers training camp at Leon Springs, Texas.[ii]  The faculty also decided that all men who left school to enlist in the military, at any time throughout the semester, would not only be given the credit for the courses they were enrolled in, but also would be given the opportunity to return and finish their degrees once they returned from the war.[iii]

On December 10, 1917, a popular TCU student organization, the Brushes Club, presented its service flag commemorating 145 TCU students and alumni in military service to the university community.[v]  The Service Flag was a way for these TCU students to show their pride in and support for those TCU students and alumni who were serving the United States.  In addition, the club stated that stars would be added to the flag for each Horned Frog who answered the call to serve.

During the war, Americans prioritized rationalizing their food consumption to leave more meat, wheat, fats and sugars for the men and women serving.[vi]  To decrease food consumption, rationalize their intake and be more cost efficient, TCU faculty and students grew their own vegetables on campus.  With half an acre, students and faculty grew a wide variety of vegetables during the spring of 1918.[vii]

TCU faculty and students also responded to the war by joining the Red Cross and sending Christmas cards to Horned Frogs serving abroad or in the United States.

[i] Christopher Capozzola, Uncle Same Wants You: World War I and the Making of the Modern American Citizen, (Oxford University. Press, 2010).

[iii] “Credit Will Be Given to All Who Answer the Call,” The Daily Skiff, May 4, 1917, Special Collections, Mary Courts Bennett Library, Texas Christian University.

Kingsbury, Celia Malone. For Home and Country: World War I Propaganda on the Home Front. Lincoln: University of Nebraska Press, 2010.

This book looks into how American and European propaganda affected people on the home front.  In addition, the consequences that arose during and after the war in terms of social justice and race relations.

This book takes the American experience during the First World War as a prism for how Americans mobilized for the war, chose to fight it and how it changed the culture.  From rationing food, knitting apparel and enlisting for military service, Americans contributed to the war and country we see today.