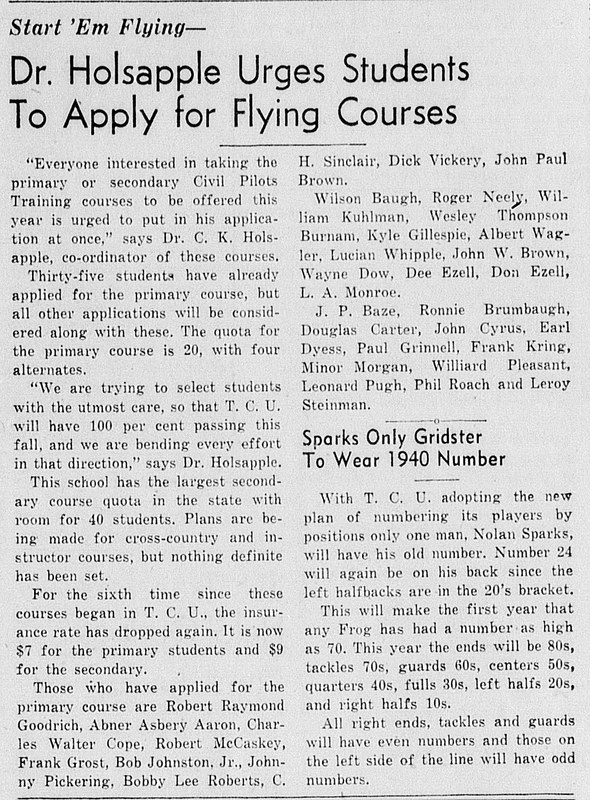 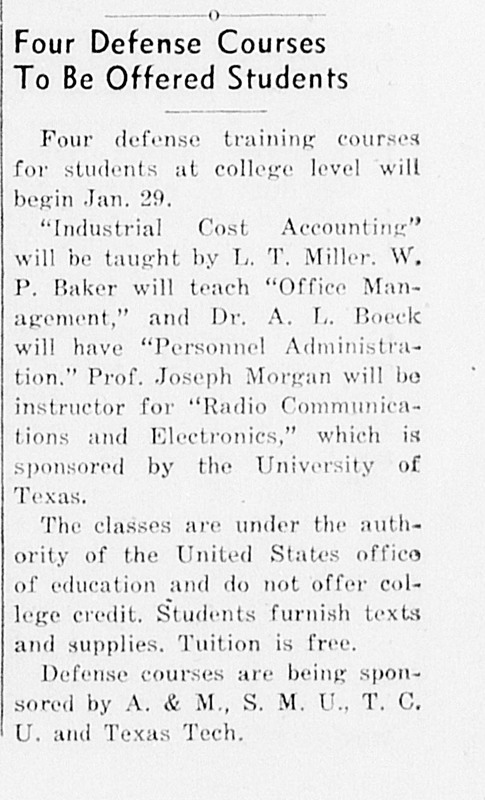 A January 1942 Skiff article introduces the new courses that will be offered in Spring 1942.

Universities across the nation experienced student enrollment declines and other complications during World War II. Texas Christian University faculty issued a statement at the start of the war, “it is our conviction that the regular processes of education should continue as normally as possible, so that well educated leaders may not be lacking in the days of stress or in the period of reconstruction that shall follow war.”[i] TCU worked to continue education by implementing course curriculum to help prepare students for war, starting programs such as the Evening College, maintaining student enrollment threatened by the draft, and developing accommodations to the academic calendar.

TCU focused on expanding course curriculum to prepare and train students for war by  offering courses such as Modern European Political Thought and German.[ii]  In 1941, women were able to take classes in defense training which included marching and first-aid training.[iii] TCU also offered military training programs that offered classes such as Radio and Electronics and Civil Pilot Training.2 The military course programs received funding from the Engineering, Science, and Management War Training (SMT) program designed to help benefit government agencies through higher education.[iv] The rigorous programs required a high level of proficiency in math and physics, and many students dropped out before the completion of the semester.[v]

The TCU Evening College, founded in 1936, provided an opportunity for students who worked during the day to continue their degree at night.[vi] TCU emphasized the importance of the college in the course catalogue by explaining that the war, “placed an increasing premium on education. In every phase of economic and social endeavor the trained and educated man now reaps the rewards.”3

TCU experienced a decrease in the amount of drafted students enrolled.[vii] The university assisted drafted students by allowing only drafted seniors to graduate without finishing the remainder of their degree.8 TCU administrators implemented The Selective Service College Qualification Test, part of the Selective Service Act of 1948, to determine if the drafted students were able to stay at college and complete their education before going to war.[viii]  To allow students to receive degrees quicker, TCU shortened degree plans to two and a half years, expanded the academic calendar to twelve months, and switched from semesters to trimesters.[ix],[x]

The university worked to accommodate the national emergency of the war and seeked to dedicate students at TCU as “individuals and as leaders of youth to the defense of America.”[xi]Other universities across the nation faced similar difficulties.[xii] TCU aided its students by implementing military programs while also placing a significant emphasis on education during this time of crisis.

This book is an analysis of wartime higher education and how universities were affected during the war. The author also in depth examines the role that colleges and universities played in the war.

The book is a detailed overview of how education in high school and colleges were affected by the war. Specifically chapter five is a thorough analysis of accelerated education programs and how they affected students.