Following WWII, approximately 2,000 veterans attended Texas Christian University on the G.I. Bill, something many considered a mere dream before the war. Veterans came to campus in full force; however, their beachhead was now a classroom, text books replaced their rifles, and it was time to adjust back to civilian life. According to The Skiff, “veterans who have invaded on the campus this trimester like the way they’ve been taken into the student body with none of the expected civilian exclusiveness.”

Socializing was easy, but classes were not for former soldiers used to being always on the move. They wanted to get through and graduate as soon as possible. Floyd Casstevens, a former army artilleryman, stated, “my only gripe about school, is the comparatively slow way classes are conducted, if they could speed them up to the pace army instructors used we could all finish up quicker.” Jack Dent, on the other hand, knew his age was an issue compared to the younger student population. “I'm no spring chicken” he stated, “and it’s hard, but I’m going to buckle down and get through as soon as I can.” [i]

Although inclusiveness was not an issue, veterans still wanted something to call their own and created Frog Vets Club to assist vets. They established a TCU veteran loan for $5000, and found cheap housing such as fully furnished apartments for rent at a rate of $30 a month.[ii] The University also assisted veterans in 1946 when it purchased “barracks-style housing” from Camp Berkley in Abilene, TX. This housing gave 200 single student veterans an on-campus life with the familiarity of the military.[iii]

Between 1941 and 1945 an estimated 350,000 women enlisted in all branches of the military.[iv] A total of 17 G.I. Janes attended TCU after WWII. The first four ladies were: Myrtle McElroy Maxwell, Lenore McAllister, Lucille Hawkins, and Edna Welke. All had served proudly in the Women’s Army Corps. They all loved TCU; however, they agreed with Lucille Hawkings; statement: “Every day I wish I were back in the Army[v]”

The G.I.  Bill, also involved racial discrimination and exclusion. The final version of the G.I. Bill that became law was drafted by racist representative John Elliot Ranking of Mississippi. He noticed that the G.I.  Bill was race and gender neutral and would be beneficial to the progression of civil rights, so he added a caveat that limited African Americans and women’s ability to receive what they had rightfully earned. This kept “the natural order of things”, especially in the Jim Crow state of Mississippi.[vi]

The ladies and gentlemen at TCU set a standard for how the student veteran population would be treated after WWII and in future years. Veterans were not ostracized, but welcomed and became a key role in the student population by playing sports, associating with traditional college students. and of course, helping each other just like the military had taught them. 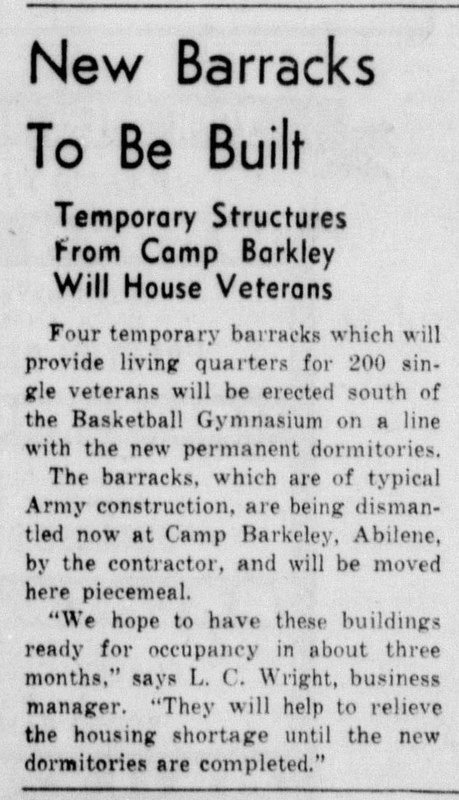 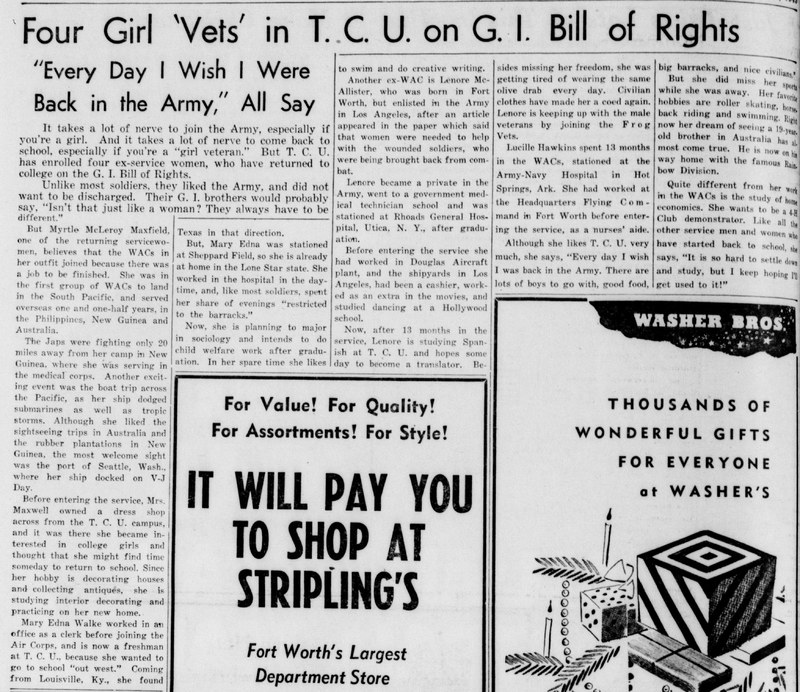 This book details the political debates and issues facing the Serviceman’s Readjustment Act of 1944 and how it was re drafted into the G.I. Bill of Rights.

This book is a collection of interviews conducted by Jeffrey Sushanek, and women veterans of II, this book gives the reader insight into women in the military in WWII, and the struggles they encountered.