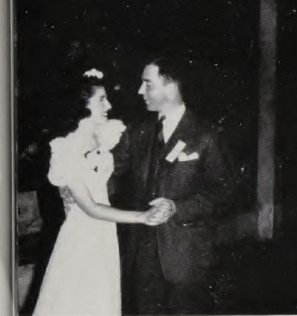 Dancing the night away!

During World War II, many college girls and their sweethearts wondered about the future of their relationships with the looming war ahead. Countless others asked themselves if it was better to wait for a man to return from war, or to marry him before the war began. Collegiates all over the United States and the world asked these questions. TCU was no different.

Many TCU events highly encouraged socialization between men and women on campus. Dances, pep rallies, and dates brought students together, but students still could not be alone together in dormitories and had strictly enforced curfews. “Public anxiety over moral order is rarely more exaggerated than in the upheaval of war,” but young people at TCU found more ways to be together both on and off campus.[1] Pictures and news of couples, school dances, and dating were common in the TCU newspaper, The TCU Skiff, and the Horned Frog yearbook. The newspaper also provided an outlet for student opinion, and relationships and marriage were frequently a major topic of conversation.

In 1942 a Skiff poll asked 100 TCU students if they preferred marriage or to wait for their soldier to return from war to tie the knot. The results showed fairly split opinions. Forty-two students favored “no understanding” (no kind of formal engagement whatsoever), while thirty-six would take marriage vows, and twenty-five wanted a formal engagement.[2] These results were somewhat surprising, as it was common in this time for girls to attend college in search of a husband rather than a degree.[3] Just two years later in 1944, another Skiff poll asked 100 TCU girls which was more important, a marriage or a successful career. Only one girl preferred a career to marriage.[4]

It is not surprising that many students were married at TCU during WWII. Many of these couples consisted of a husband who was in the military and his student wife. The TCU Skiff constantly ran updates on alumni and current female students’ engagements and marriages. The Skiff even ran a few articles that featured married students praising marriage during the undergraduate years, especially for those ladies who were married to soldiers. In 1943, one student admitted that going to school “gives her something to do” while her husband was away with the Air Force; another said her Marine husband inspired her to study because he “insists she make the honor roll.”[5] 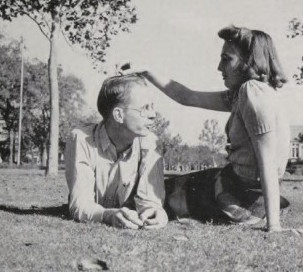 Lounging together in the campus commons.

TCU began a course on “Marriage and Family Relations” in 1942 to give students advice on how to find a good mate and have a successful marriage. The class discussed the “epidemic of war brides” and the complications of a “marriage during a period of emergency.”[6] The class’ students also pointed out the financial advantages of a soldier and student bride who married before the war. With a monthly military stipend sent home and saved, the couple could have a nice nest egg for their postwar relationship. These couples certainly saved more than those who were still paying for dates each week.

Wartime at TCU brought challenges for young people and their relationships but also provided reasons for young men and women to become closer than ever to the person they loved. Whether a couple was married and separated by the war or dating and cheering on the Frogs at weekly ball games, both casual and formally committed romance had a place on TCU’s campus during the Second World War. 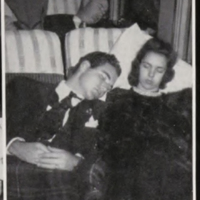 Snuggling on the train ride back from an away football game.

McEuen’s book explores how women’s bodies and minds were used for profit and patriotism in the Second World War. Through the use of personal letters, posters, advertising, and more, this book shows how media and propaganda convinced women that their personal appearance would help the war effort. In particular, advertisements used images of romance and couples to sell products, a tactic used even in the TCU newspaper.

This book describes the changing roles of women in World War II and details women’s move from the classroom into the factories. Focused on students and faculty at the all-female Rockford College in Illinois, the book utilizes the Rockford community’s personal effects such as letters and newspaper stories to show the thoughts and opinions of the school community during wartime. This book also discusses the fight for women’s rights in the 1960s and 1970s and the emergence of feminism in American society.