Effect on Sports and Athletics 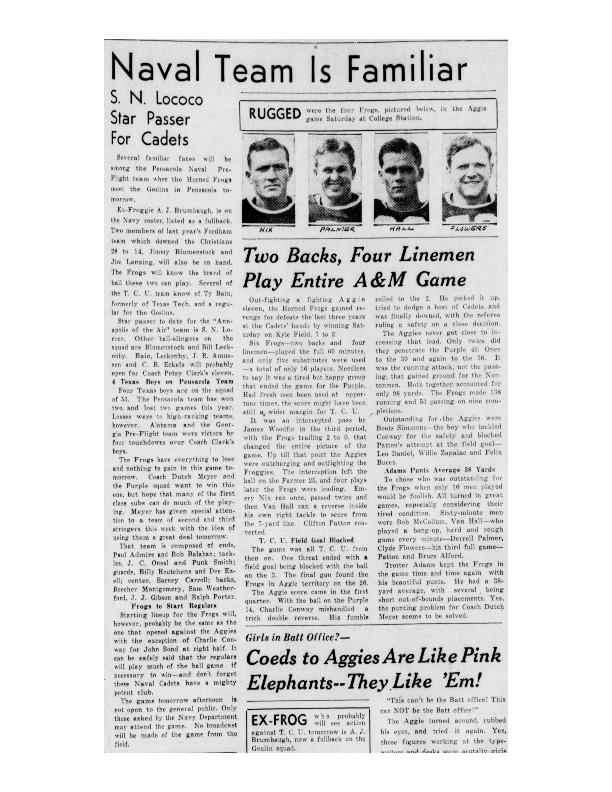 This photo, taken from an article in “The Skiff,” explains how former TCU athlete, AJ Brumbaugh, was playing for the Pensacola Naval Football Team against TCU in the upcoming game.

World War II affected TCU students, alumni, and faculty. In particular, the athletic department at TCU faced many challenges and experienced a lot of changes from 1941 to 1945. Athletic Director Howard Grubbs, commissioned as a junior grade lieutenant in the Navy Reserve, became the fourth member of the athletic department to be called into service at the time.[i] The fact that the United States drafted so many collegiate athletes forced the TCU athletic department to use members of service, whenever they were on campus, to compete under TCU’s name. Coach Meyer anticipated a decline in quality of play.[ii]

A former football player from TCU named AJ Brumbaugh transferred from TCU after enlisting into the Navy.[iii] Brumbaugh had transferred to play football for the Pensacola Naval Team, and he came back in 1942 to play against the Horned Frogs. Historian Brian Ingrassia explains that the sport of football interested the armed services because sports helped develop boys into men and developed skills that could be valuable in combat situations.[iv]

In addition to the United States drafting players from TCU, the country also drafted TCU alumni and faculty as well. Dutch Meyer, who coached the Horned Frogs to a 1939 football National Championship, had a son named, “Little Dutch Meyer,” who became an athlete at TCU.[v] “Little Dutch,” became a professional baseball player after graduating from TCU, but he paused his professional career in order to enlist in the Army Air Corps.[vi] In 1942, TCU’s varsity baseball head coach, Walter Roach, enlisted in the Naval Reserve and left coaching responsibilities to Dutch Meyer.[vii] 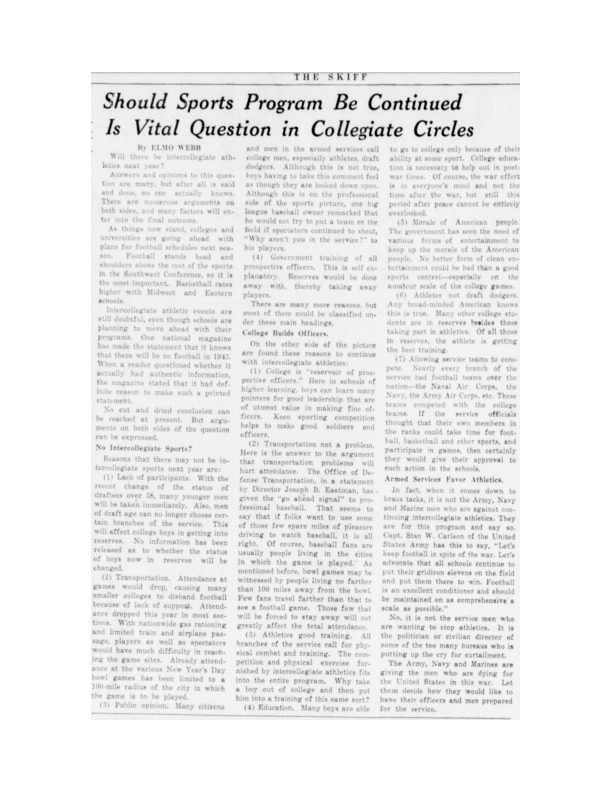 This photo shows the debate that occurred on campus in regards to the upcoming collegiate sports seasons in which students voiced their opinion on why schools should and should not compete.

After seeing the war directly affect faculty and alumni, students on campus started to become more vocal about their discontent with the impact of the war on sports. Students became increasingly concerned about the chance of there being no football season in 1943.[viii] In contrast, others did not want to have any athletic programs because of costs, lack of athletes available at schools, and the inability for schools to compete due to enlistment. As a result of these conditions, sports like TCU Baseball, Tennis, and Golf, essentially disappeared from campus and were forced to become intramural sports. Douglas Stark’s book, “Wartime Basketball,” explains that basketball emerged as a popular sport during this time because it required only five players from both teams to compete.[ix]

During the first two weeks of spring football practice, Dutch Meyer faced problems with roster size as his team dwindled from forty-five to twenty players.[x] This showed the dramatic impact that the war was having on campus and how World War II was directly affecting the TCU athletic department. However, TCU announced that spring sports—Tennis, Golf, Track and Field, and Baseball—would return in the spring of 1944.[xi] A 48-hour limit on travel for members of the Navy affected TCU’s decisions to cut programs as several TCU football players were also members of the Navy. This 48-hour limit made traveling difficult, as TCU needed to travel to the southern region of Texas to compete in their conference,.[xii] Transportation, the loss of students to enlistment, and the lack of athletes on campus were just some of the effects felt by TCU’s athletic department because of World War II.

This book explains how the Department of the Navy worked to preserve the game of football and its impact on World War II through their “Lend-Lease” of officer candidates to colleges to play football.

This book explains the impact of World War II on the 1942 Rose Bowl game, which was moved from the West Coast to the East Coast out of fear of Japanese attacks.